For our final session of the year yesterday, we welcomed Alice (corneal service), Majid (medical student), Clare (laboratory) and Beatrice (ocular oncology). It was great seeing how everyone brought different perspectives to the cases we discussed.

We started with an overview of basic histology of the eye, and a chat about the usefulness of PAS stain. We also touched on Perls’ Prussian Blue stain for demonstrating iron although we couldn’t quite remember all of the different named lines in the cornea.

We also chatted about small round blue cell tumours, and how the diagnostic process depends on the patient’s age. This is a more an issue for histopathologists, but it’s useful for ophthalmologists to be aware of the challenges. I’ve previously cited an open access article by Sharma et al in Indian J Med Paediatr Oncol (2017).

The cases we viewed were a mixture of intraocular tumours and orbital and eyelid pathology. Here are a few of them.

This field shows a tumour with non-pigmented (amelanotic) and pigmented components. Many of the amelanotic cells appear separated from their neighbours, in contrast to the pigmented portion on the right.

Higher power shows variation in size and shape, both of the entire cells and of the nuclei. Nucleoli are also prominent. The cells have clearly defined polygonal outlines. There is a mitosis towards the bottom of the image centrally. These are epithelioid cells in a choroidal melanoma.

Low power here doesn’t give us much to work with in terms of identifying anatomical structures. The bottom left part of the specimen looks “busy,” which makes me think of a cellular infiltrate, probably inflammatory.

Higher power of the upper portion shows a few normal fat cells (which can be found in the tarsal plate and fornix). Fat dissolves out when a specimen is processed, leaving empty rounded spaces. I’ve marked one with an asterisk. 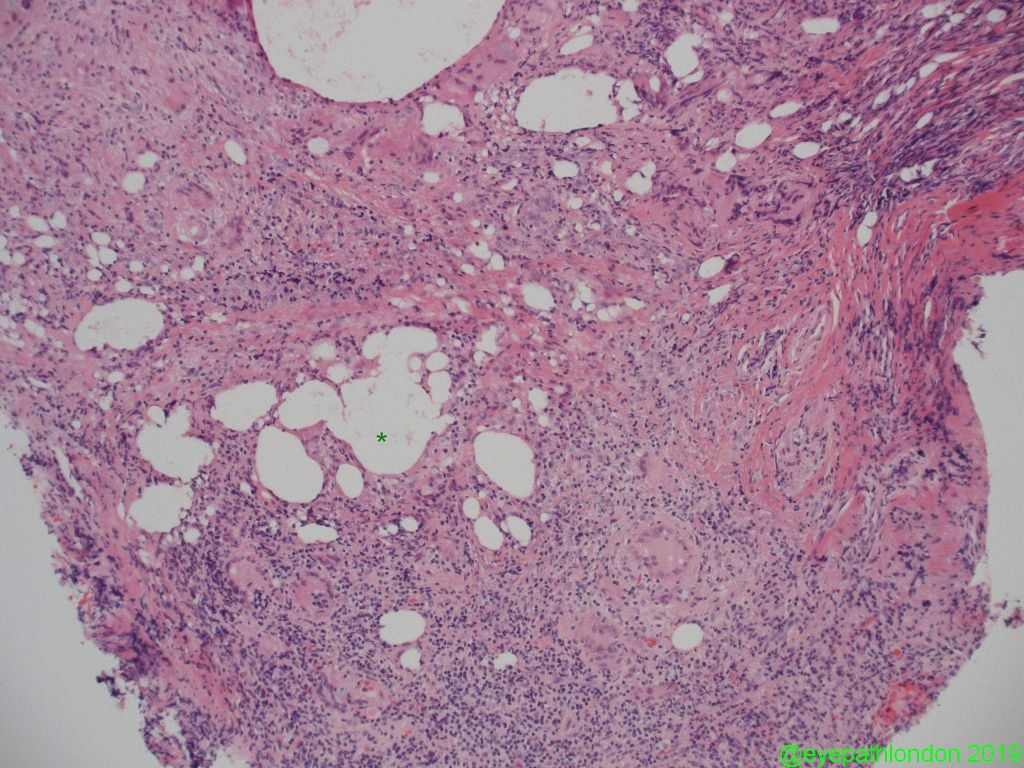 Higher power of the inflamed area also shows empty fat spaces (one marked with an asterisk) although they don’t have the regular outlines of normal fat cells.

This is a typical example of a chalazion.

This low power view of the skin shows a very busy dermis, and perhaps small blood vessels are more prominent than usual.

Higher power of the orbital tissue shows large spaces containing odd material (I don’t know precisely what it is, and some has probably been lost during processing) as well as severe inflammation.

On higher power still, we see many small blood vessels with plump endothelium and an intervening infiltrate of mixed inflammatory cells.

The inflammatory cells include striking eosinophils (red cytoplasm, bilobed nuclei) as well as lymphocytes, plasma cells, macrophages and multinucleate giant cells. The giant cells are smaller than the ones from Case 2.

In summary, we have intense inflammation associated with increased vascular structures and spaces containing foreign material. This patient has had embolisation of a vascular malformation, followed by debulking surgery.

For comparison, I showed a couple of other cases in my post from October 2016 (Case 4).

That’s all for this month. I hope you have an excellent festive season wherever you are!

This site uses Akismet to reduce spam. Learn how your comment data is processed.

The cases and scenarios I present here are intended as educational material only, for use by medical professionals. They should not be taken as a source of medical advice. Opinions expressed are my own, and should not be taken as representative of any organisation with which I am associated. I do not provide medical advice through this site. If you are an ophthalmologist or histopathologist who would like my opinion on a specific case, please arrange a formal referral through your usual hospital/clinic procedures. © Caroline Thaung 2016-2022. All rights reserved.